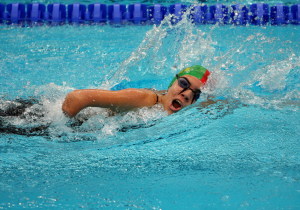 Being able to compete in a swimming match is a thrill that some people live for. Some professional swimmers love to be in the water, but the element of thrill is introduced when the sound of the shotgun firing indicates that a match has begun. Competition is one of the driving forces for many professional swimmers, and professional athletes in general. Some of them claim that they cannot reach their full potential unless they know they are in competition with other athletes for the same title. Competition is a major attraction to swimming for professional athletes.

For those who have given everything they have to becoming the strongest swimmer possible and have managed to beat out the competition, the reward is the recognition of being the best. Professional swimmers, such as those competing in the Olympic ceremonies, are recognized and accredited by the level of swimming achievement they attain. Swimmers are often recognized by gold, silver and bronze medals, and are given titles ranking them as first, second and third best competitors in whatever rank their competition presides over. The Olympics obviously honor the best athlete in the world, and the competitions get smaller from there.